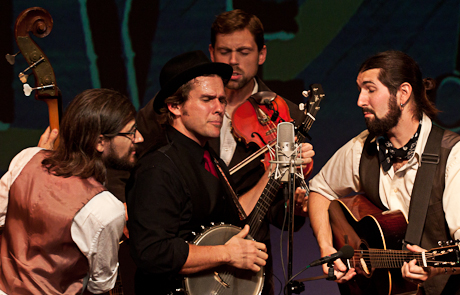 May 3, 2011 – The Steel Wheels Live at Goose Creek album came out this week…check the announcements and links to iTunes and CD Baby on the Steel Wheels Artist Page, along with a preview from our 1-hour TV special on the band that will air on Comcast local channels in Northern Virginia starting on May 16.  CD’s are also available from the band, so hit a Steel Wheels show if they’re in your area.

What a great bunch of guys to work with…easy going, yet effective, they were a pleasure throughout the production and post- production processes.  This album is a great example of what they’re like in person…tight harmonies, traditional music with elements of contemporary jam bands, and a great dynamic range. 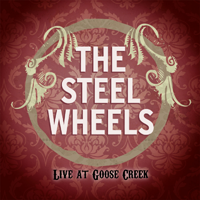 The Steel Wheels are at the forefront of a new generation’s take on traditional music. While their 4-part harmonies and string-band instrumentation draw on the rich musical heritage of Appalachia, their improvisational approach to composing, arranging, and recording brings to mind modern ensembles like The Avett Brothers, Nickel Creek, and even the Grateful Dead.

The four-piece band is based in the Blue Ridge Mountains of Virginia, where lead singer and primary songwriter Trent Wagler has been a scene staple for nearly a decade.  Multi-instrumentalist Jay Lapp was touring with several successful Midwest bands when he and Wagler crossed paths in Harrisonburg, Virginia and a musical partnership began. The two joined with upright bassist Brian Dickel and fiddler Eric Brubaker to form The Steel Wheels..

Wagler’s voice, which has been compared to that of Darrell Scott and John Fogerty, is accentuated by smooth four-part harmonies with the other band members. Brubaker’s fiddle, both lively and evocative, suits the band exactly, and Dickel’s upright bass grounds the outfit. Jay Lapp’s signature mandolin style is remarkable and unmistakable.

The Steel Wheels Goose Creek Live recording session was captured in front of a live audience at the Franklin Park Performing Arts Center, a 19th-century barn that has been converted to a modern performance space in Western Loudoun County, Virginia.  The intimate theatre, which seats 250, has acoustic properties particularly well-suited to recording small ensembles, and Goose Creek Music used its proprietary Recording, Mixing, and Mastering processes to recreate the sense of space and movement from the live show.

Stuart Martin, managing partner and technical director for Goose Creek Music and owner of Stonebridge Studios said, “The band performed with great dynamics and tight ensemble play that night.  It’s unusual for a band to play so flawlessly that every song can be published with a single take.  When we started looking for things to cut, we couldn’t find a single song we could live without, so we put the entire concert on the album.”  Goose Creek Music recorded the session with 4 microphones placed in and around the acoustic space of the performance, and did not edit or overdub any of the music.  The recording is a crystal-clear representation of the session, with the ability to hear changes in position as the musicians move within the acoustic space.  “Our hope is that you can follow the performance as if you’re sitting in the first row,” Martin said.

Combining concert events and audio/video capture, Goose Creek Music partners with local venues and Mid-Atlantic artists to create a published collection of live performance recordings by notable songwriters and musicians in Northern Virginia, Washington D.C. and Maryland.  Goose Creek Music has recorded over 250 songs as live performances since 2008, and continues to release the best performances from their collections as audio recordings on iTunes and CD releases.  Music Videos of Goose Creek Live performances can be viewed at https://goosecreekmusic.com.  The next Goose Creek Live session features Naked Blue, Todd Wright, and ellen cherry on May 20, 2011 at the Cultural Arts Center at Montgomery College, Silver Spring/Takoma Park Campus.

Goose Creek Music began its Goose Creek Live concert series in March 2009 with a live audience audio and video recording of Southern Maryland Rock and Soul vocalist Sam Grow with his band.  Within a few months, the company released a live album from that concert, and also produced a series of 30-minute television shows and music videos of Grow and other performers from the first season.

Beginning with those first shows, Goose Creek Music has recorded over 250 songs at 13 concerts, and produced 7 television shows for Comcast Cable in Northern Virginia.  They have published nearly 50 music videos at https://goosecreekmusic.com as well as on Youtube and Facebook, and released live CD’s and digital release albums.  Performers have ranged from Virginia-based national Americana music touring act The Steel Wheels, to some of Washington DC’s award-winning songwriters and bandleaders like David Kitchen, Tom Principato, Billy Coulter, and Ruthie Logsdon, to Bluegrass legends Jimmy Gaudreau and Moondi Klein.

Goose Creek Music records each show in multi-camera digital video and multi-track digital audio, and captures the artists performing their favorite songs without the comfort of endless takes in a recording studio.  Goose Creek chooses the best performances from the shows and mixes and masters the soundtracks with unusually accurate detail and clarity for a live recording environment.  The company then publishes audio recordings, their television series, and music videos of the concerts.  The “Goose Creek Music:  Collections One” album is a compilation of fan favorites from those live recordings, as well as several selections recorded at Stonebridge Studios in Leesburg, Virginia.  Stonebridge is owned by Goose Creek Music technical director and managing partner Stuart Martin.

The recordings are predominantly original music, the favorite songs of professional local talent.  The Washington/Baltimore area is fortunate to support a thriving music community, and the Goose Creek Music catalog  is quickly growing into an archival collection of original music from the area’s award-winning area songwriters and musicians.

March 5, 2011 – We just felt like hearing this song today.  Hang with us through our original animated intro…David Kitchen wrote this song with Harry Blevins and it’s a really sweet song.  David recorded it for the first time at Goose Creek Live on May 16, 2009.

March 3, 2011.  We had a great Goose Creek Live show with Janine on February 24….the band was in rare form both on and off the stage (nice matching Elements, folks…kids were hanging out in the parking lot waiting for clowns to emerge).  Rachel Leon from Patch.com showed up and did an interview with Janine, and I snapped my usual zillion photos when I wasn’t pacing the whole facility.  Some of my favorite pics are below…

Janine and Max write great songs…think Tom Petty with a female perspective on the lyrics.  They performed a BUNCH of Janine’s classic and award winning songs…Waking up in Texas, It Should Be Me, I’m Not for Real…all great rootsy pop tunes that sound just like your life.

Even better…Patty Reese was in attendence with Ruthie and Janet, and ran in to Paul Shreve, the music writer, producer, and media consultant for author Meg Gardiner.  Paul worked with Goose Creek Music to produce music for Meg’s new novel “The Liar’s Lullaby”, and Patty provided the vocals.  You can download the tracks from iTunes, or from Meg’s site for free.