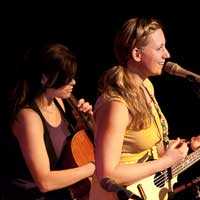 Award winning songwriter and troubadour Victoria Vox has been making waves with her refreshingly modern use of the ukulele.  Her original style is certainly contempoarary, but it remains clear that her voice and songs themselves are at the heart of everything she produces.

Victoria began writing songs when she was 10, using the beats and sounds of her VT-400 Casio keyboard. Following her dreams, Victoria graduated from The Berklee College of Music with honors and a degree in songwriting — releasing a handful of DIY, guitar-driven albums before a friend gave her a ukulele.

Her debut ukulele album, Victoria Vox and Her Jumping Flea was released in 2006. The refreshing disc was well received, and featured on NPR, songs were featured on television and in independent films. She has been awarded runner-up for “My Darlin’ Beau” (Jumping Flea) and First Place for “C’est Noye” (from her 2008 album, Chameleon) in the International Acoustic Music Awards, and has been included in Relix Magazine’s list of artists to watch.

Victoria, who lives in Baltimore MD, performs at a variety of venues and festivals across the US, Europe, and Canada.  She continues to tour as an independent artist and is dedicated to playing the ukulele and helping make it cool again.