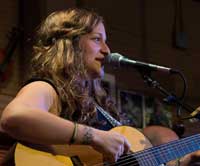 Raina Rose is a California-born, Oregon-bred and now Austin, Texas-based songwriter who has been described as a “barefoot indie/folk mystic poet.” Raina has performed all over the USA and UK and conjures soundscapes with spiritual influences from Gillian Welch to Bob Dylan, Joni Mitchell and Patty Griffin. Raina performs regularly with her bassist husband Andrew Pressman, and her blogs about motherhood and her musical life are published frequently by outlets including The Huffington Post

In addition to her work with Andrew, Raina regularly tours with Rebecca Loebe, the music producer of Three Nights Live. In the past four years Raina and Rebecca Loebe have performed over 200 shows together throughout the United States.

Three Nights Live includes new, full-band performance of the Raina Rose song “Act of God,” which was previously only available as an acoustic B-side. In the Three Nights Live web series, Raina describes how the song was inspired when her tour schedule took her through tornado devastation in St. Joseph, Missouri. With a full band, Act of God becomes a rock anthem about the end of a relationship, with melodic counterpoint and power chords from Will Robertson on electric guitar, and soaring vocal harmonies from Raina, Rebecca Loebe, and Bernice Hembree.

Part of Goose Creek Music’s ongoing series of live album releases, Three Nights Live was recorded over 4 days in November 2013 at three classic listening-room venues in Texas and Oklahoma: McGonigel’s Mucky Duck in Houston, The Cactus Café located on the University of Texas’ Austin campus, and The Blue Door in Oklahoma City. Rounded out by studio musicians Daniel Walker and Will Robertson, Three Nights Live features original songs from four songwriters, and a few surprising covers ranging from folk and country to Motown and grunge. Goose Creek personnel toured with the artists, recording multi-track audio and video of each performance. A web video series about the sessions and the artists’ lives as touring musicians was released simultaneously with the album, along with individual EPs for Rebecca and Smokey & the Mirror featuring additional performances from the tour.