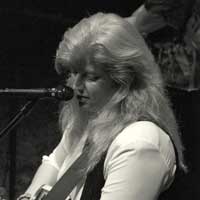 Lisa Taylor was raised just outside of Washington, D.C. and bottle fed on the music of the seventies –Carole King, B.J. Thomas, Rare Earth, Three Dog Night, The Carpenters, Simon and Garfunkel, Crosby, Stills and Nash, The Supremes, Aretha, Donna Summer – and all of the show tunes from the 40’s through the 70’s. Lisa played guitar, clarinet and demonstrated near perfect pitch as well as song crafting before the age of ten.

By the age of 14 she had taught herself set drums so she could join her sister’s rock and roll band. Lisa and her sister Dana formed several bands, the most notable of which was “Sister”- a rock and roll- big- hair- band.  Lisa’s formidable drumming and distinct vocal harmonies made “Sister” one of the most sought after female rock and roll bands of the Mid-Atlantic Area from the early 80s  into the mid 90s.


Today, Lisa is a mommy, therapist, singer-songwriter, guitarist and drummer from the Washington D.C. area. She is a two time WAMMIE  (Washington Area Music Association) winner, A Kerrville New Folk Finalist, A Mountain Stage Finalist and a Formal and Tricentric showcase performer for the prestigious North East Regional Folk Alliance Conference. Her talents as a drummer, percussionist, arranger and vocalist are featured on over 40 albums, some of which have appeared on film and television. Whether in the intimacy of solo performance, fronting her own band, or as the rhythmic engine as a member of Andrew McKnight & Beyond Borders along with founding Nitty Gritty Dirt Band member Les Thompson, Lisa’s musical blessings are meant to be shared and enjoyed.