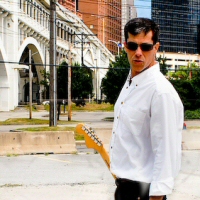 Born in Cleveland Ohio, Jeff Sherman took up the guitar at age 11 and began his musical career in high school where his earliest bands performed at local dances and student mixers.  During his musical career he has played lead guitar in a variety of bands and across a wide spectrum of musical genre, including rock, blues, country, pop, bluegrass, folk, country-rock, and light jazz.

Jeff’s sophisticated approach to guitar/vocal performance has won him the respect of discerning audiences throughout Northeast Ohio.  In addition to his monthly appearances at Fat Fish Blue and Brother’s Lounge in Cleveland, he has held longstanding engagements at many of the area’s most popular and successful establishments and several Ohio wineries. In addition, Jeff has performed opening concert sets for the band Wishbone Ash, for Grammy-nominated songwriter Bill Morrissey, and for rockabilly legend Commander Cody.

One aspect of Jeff’s work that audiences find engaging is his use of digital looping technology.  By simultaneously recording and playing back his guitar live and in real time, Jeff performs with the complexity and depth of a small ensemble.  Performances are enhanced through the use of high quality but compact sound reinforcement and digital audio processing equipment.  Jeff uses the most modern technology to deliver a high-caliber sound that never overwhelms the listener.

His American Stranger album from Goose Creek Music is a collection of his favorite cover tunes from the Rock and Roll songbook, featuring both deep album cuts and best selling singles.