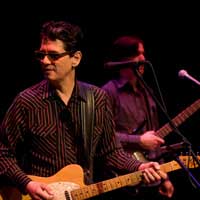 David Kitchen is a singer, song writer and guitarist living in the Washington D.C. area. David has been a professional musician for over three decades, writing and performing his own music from the Rockies to the Atlantic Ocean with stops, both literal and figurative in the Mississippi Delta and the Appalachian Mountains.

David has honed his skills performing before live audiences on an almost nightly basis, working as a sideman for some of Washington DC’s best bandleaders, as well as fronting his own bands. His heavy schedule finds him equally at home playing such up scale venues as the Millennium Stage at the Kennedy Center and the Barns at Wolftrap, or the beer and sawdust circuit.


David Kitchen provides  something for everyone, leading to frequent comparisons to Buddy Holly and Paul McCartney. At closer inspection, David’s songs celebrate life’s imperfections. He leads by example, describing our difficult times with sly lyrics and an energetic, melody driven sound.  His distinctive songwriting ability has led to multiple Washington Area Music (WAMMIE) Awards including Songwriter of the Year,  Song of the Year “If Love is Blind”, Best Debut Album “Live at The Sunset Grille” with The Thrillbillies and Best Male Pop Vocalist of 2009. He’s also been WAMMIE nominated for Best New Artist, Roots Rock Instrumentalist, Roots Rock Vocalist, and Musician of The Year, and his songs have been used in TV series and Paramount’s motion picture “Wild Iris”.