Between solo tours and an increasingly packed band schedule, Sam Grow is performing about 250 dates a year, yet his roots are still in Southern Maryland. On a warm summer evening, head out to Gilligan’s Pier in Newburg, MD, and enjoy a night on the beach with seafood, beer, and dancing with “The SGB Family”, while the band rocks the outdoor stage…there’s not a better time to be had this side of the Atlantic! 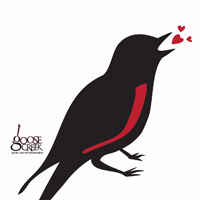 There are also a few Steel Wheels tracks on our compilation album “Goose Creek Collections: Disk One”. Check it out on iTunes and CD Baby…

Goose Creek Music is delighted to announce the release of Jimmy Gaudreau’s new studio album “Pieces and Bits”. The recordings are co-produced by Jimmy Gaudreau and Stuart Martin, and were compiled over a period of two years at Stonebridge Studios, a full-service music recording studio near Leesburg, Virginia. The songs are primarily instrumentals, and feature an appearance by virtuoso jazz guitarist Frank Vignola, as well as support from noted bluegrass musicians Mike Auldridge, Moondi Klein, Orrin Starr, Jens Kruger, and many others. The album is available for sale on iTunes and from CD Baby.